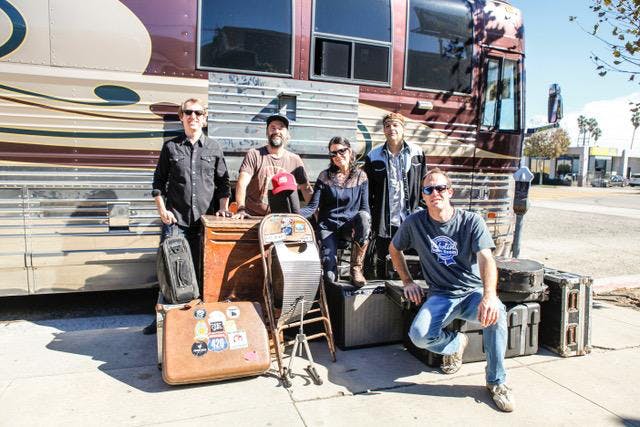 Donna the Buffalo is Jeb Puryear (vocals, electric guitar) and Tara Nevins (vocals, fiddle, guitar, accordion, scrubboard) joined by David McCracken (B3 Hammond organ, Hohner Clavinet & piano), Kyle Spark (bass) and Mark Raudabaugh (drums). “It’s been really fun with this lineup,” Puryear says. “You get to the point where you’re playing on a really high level, things are clicking and it’s like turning on the key to a really good car. It just goes.”

Donna the Buffalo drew its original inspiration from a cherished part of the American heritage: the old-time music festivals of the south that drew entire towns and counties together. Not only was it playing music at these events, it was the vibe and the togetherness that bonded the people that attended.

“Those festivals were so explosive, and the community and the feeling of people being with each other, that’s the feeling we were shooting for in our music.” Puryear says, “Donna the Buffalo is an extension of the joy we’ve found.”

“It’s a great feeling to promote such a feeling of community, like you’re really part of something that’s happening, like a movement or a positive force…” Nevins says. “All those people that come and follow you and you recognize them and you become friends with them — you’re all moving along for the same purpose. It is powerful. It’s very powerful, actually.”

Donna the Buffalo has released ten albums and are affiliated with several others, including Puryear’s 2007 solo album Hopes and Dreams and a 2003 release, Wait Til Spring, with Jim Lauderdale. The band’s 2008 release Silverlined, as well as the 2013 release, Tonight, Tomorrow and Yesterday, (both on Sugar Hill Records) did well on the Americana Music Chart, each placing well into the top ten. In 2011 Nevins released Wood and Stone, produced by Larry Campbell in Levon Helm Studios, and Mule to Ride in 1999 on Sugar Hill Records.

Take a look at their official music videos: